COEHS Diversity Committee Statement in Support of Black, Indigenous, and People of Color 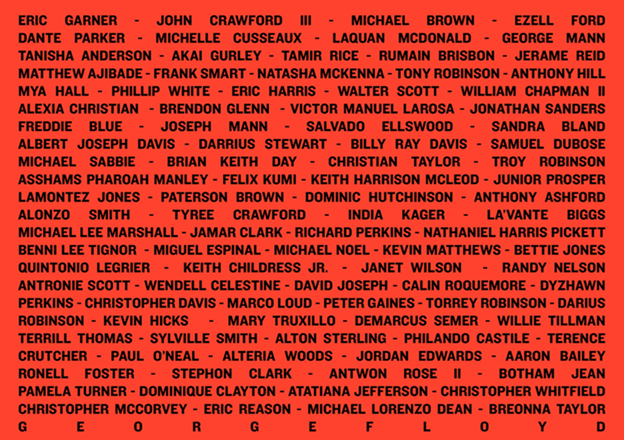 As the College of Education and Human Sciences Diversity Committee, we stand in solidarity as critical educators and faculty who support the protests occurring in our country. We understand the rage. We acknowledge the feelings of numbness. We recognize the dire need to engage in “radical healing”.

The convergence of recent events—the deaths of George Floyd, Breonna Taylor, Ahmaud Arbery, Tony McCade—has created a maelstrom of anger and is felt by organized protests that are being held throughout the US to challenge police brutality and extrajudicial killings. Floyd was an African American man who yelled, “I can’t breathe!” as a police officer held his knee on Floyd’s neck until he died. Taylor, an African American woman, was killed when Louisville officers unlawfully entered her house. Arbey was shot while jogging; his death was a modern day lynching at the hands of vigilantes. McCade, a transgender person, was killed by police officers in Tallahassee. For four years (2015-2018) in a row, the police in the US have shot and killed nearly 1,000 people—disproportionately targeting African American, Latinx and Native Americans (Sullivan, Weber, & Jenkins 2019). According to The African American Policy Forum (2017), while Black women and girls only make up 13% of the population, they account for 33% of all women shot to death by police. When sexuality is added to the equation, 72% of trans extrajudicial killings were Black trans women/femmes between 2010-2016. According to data from the Centers for Disease Control and Prevention, Native Americans are killed at a higher rate than any other racial or ethnic group in the US as it relates to extrajudicial killings stemming from police encounters (Hansen, 2017). Nearly half of these deaths involve mental illness or suicide prevention (Schroedel &Chin, 2017). Similarly, the rate of police killings for Latinx is second only to African Americans.

This anger and grief stems from the lived-experiences many People of Color have had when microaggressions become life and death situations during encounters with law enforcement. The frustration stems from rage at a justice system that failed to convict the officer who killed Eric Garner, who repeated the same exact words “I can’t breathe” six years ago. We currently have a criminal justice system in the United States that let Tamir Rice’s killer go free and acquitted George Zimmerman, Trayvon Martin’s killer. Each instance of injustice demeans, dehumanizes and puts the victim on trial rather than the perpetrator. Our ire comes from witnessing tear gas, rubber bullets, arrests, and pepper spray maliciously being used to intimidate and hurt peaceful protestors while police officers showed great restraint only a few weeks ago when encountering white, armed anti-lockdown protestors. The indignation originates from knowing how racial terror devalues and dehumanizes the lives of People of Color. For too long, anti-blackness, racism, settler colonialism, bigotry and sexism have been normalized and ingrained into the fabric of our society. A radical transformation is needed.

The Black Lives Matter (BLM) movement was founded on “an ideological and political intervention in a world where Black lives are systematically and intentionally targeted for demise” as well as “an affirmation of Black folks’ contribution to this society, our humanity, and our resilience to in the face deadly oppression” (Garza, 2014). BLM not only fights for criminal justice reform, but it also advocates for LGBTQ rights, immigrant rights, workers’ rights, housing rights, and civil rights. The constellation of extrajudicial killings, the COVID-19 pandemic, high unemployment, and a chronic pattern of violating the civil liberties of People of Color has brought us to a moment of truth.

What do we as the College of Education and Human Sciences stand for? What are our core values? How do we lead at this critical moment to transform our college? As the Diversity Committee for the college, we want to see programs that build bridges to tackle critical issues of diversity, inclusion, and global harmony. We need to acknowledge and give voice to faculty, staff, students and community members who have had to endure bigotry, discrimination, racism and anti-blackness at UNM.

There is too much Black, Native, Latinx suffering at this particular moment. In major cities such as New York and Chicago, Black people make up nearly 93% of COVID-19 cases and comprise 23,000 deaths in the US (Taylor, 2020), highlighting the gross social inequities that exist. Native American people across New Mexico are dying of COVID-19 at rates 19 times that of all other populations combined, and account for 57% of the state’s cases, despite only being 11% of the population (Kaplan & Davis 2020). Latinx people are 39% of the population, but they account for almost half of all reported virus cases and 35% of deaths (Jordan & Oppel, 2020). Additionally, Asian Americans have also suffered from increased COVID-19 deaths and have been unfairly targeted by racist attacks (Oliveria, 2020) amidst this pandemic. The convergence of these events— the disproportionate deaths of People of Color from COVID-19, extrajudicial killings, migrant children separated from their families, high unemployment and underemployment— reconfirm the lack of respect given to the lives of Communities of Color. Our collective psyche is filled with anger, pain, fear, and trauma. It is in these times that radical healing and critical hope are so desperately needed. The College of Education and Human Sciences has an obligation to uplift and transform this pain into critical social action and change.